Ultra-thin, transparent and flexible – these are the attributes that distinguish the innovative OLED technology. Within the European research project PI-SCALE, with a total of 14 partners, the lighting experts of EMDE development of light act as so-called “launching customers”, i.e. as pilot customers. Together with renowned companies such as AUDI AG, Pilkington and REHAU, the experts contribute their know-how to adapting a pilot line under the LYTEUS branding to the needs of the market and customers. The aim is to make the innovative OLED lighting technology available to companies of any size in order to launch products quickly and cost-effectively. As an example of new possibilities in lighting design, EMDE development of light GmbH is presenting for the first time a prototype for a light art object at LOPEC in Munich (19 to 21 March 2019), which demonstrates the aesthetics and immaterial appeal of the latest OLED technology. 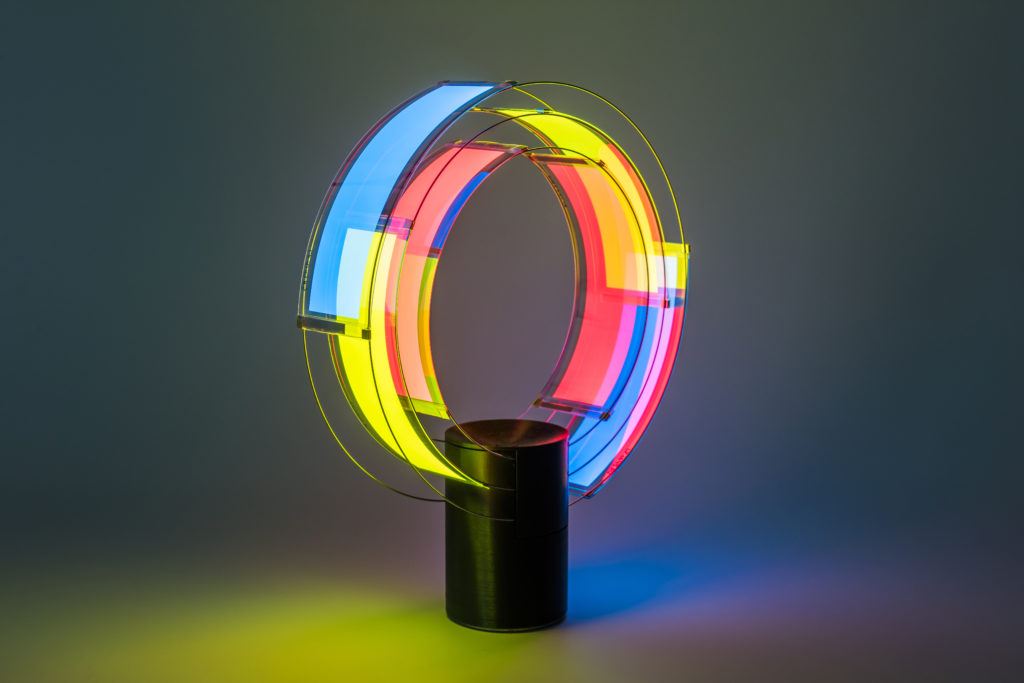 The prototype with the name “COLORLOOP” was developed in close cooperation between the founder of the GmbH and artist Thomas Emde and his colleague, product designer Christoph Petersen. The comprehensive design concept can be seen in the object – it is both an aesthetic work of art and a smart, technologically highly innovative light object.

The EMDE development of light GmbH team has many years of experience with the new OLED light and developed the world’s first OLED luminaire series, which has been available on the market since autumn 2016 under its own OMLED brand. Organic light-emitting diodes (OLEDs) can not only produce pleasantly warm and glare-free light, but can also be colorful, transparent and flexible. In order to demonstrate the almost infinite application potential of OLEDs, the interdisciplinary team of artists, designers and engineers developed a light object that playfully handles additive color mixing and the immaterial aesthetics of ultra-thin and flexible OLEDs.

Product designer Christoph Petersen of EMDE development of light about the motivation for developing the demonstrator: “Our goal is to show the variety of new applications with OLED light on an object with which the user can interact. Our light object “COLORLOOP” plays with the effect of additive color mixing by using magnetic contacting to arrange OLEDs in the three light colors red, yellow and blue differently on spring steel rings. The spring steel rings are used for electrical contacting and mechanical fixing as well as for shaping the flexible OLEDs. An advantage of the construction of the light object is the simple exchangeability of each OLED. “

Thomas Emde adds: “With “COLORLOOP” we want to present the new transparent light directly from the laboratory to the public and show application possibilities of OLED light for the design of space and atmosphere. We see new possibilities for using light as a design element for our living spaces in the immaterial appearance of transparent OLEDs and the lightness they bring. We at “COLORLOOP” are not primarily interested in a functional benefit, but rather in creating a special atmosphere by superimposing the various light colors.”

Together with research partner VTT from Finland, a battery-powered driver with programmable control was developed for the “COLORLOOP”. This means that the light object does not require a cable and different light scenes can be retrieved.

The transparent and flexible OLEDs come from the Fraunhofer FEP in Dresden. Their pilot and research lines for roll-to-roll and sheet-to-sheet production of OLEDs are currently the only ones in Europe on which this new technology can be manufactured. The teams from EMDE and Fraunhofer FEP want to work together in the future on challenges in the production and integration of OLEDs in various applications and are open to further development with partners of industry.

The results were achieved on the joint pilot line service LYTEUS of the EU-funded PI-SCALE project and financed within the framework of the European Union’s research and innovation programme Horizon 2020 under grant agreement No. 688093.

PROJECT NEWS
PRESS RELEASES
NEWSLETTER
We use cookies on our website to give you the most relevant experience by remembering your preferences and repeat visits. By clicking “Accept All”, you consent to the use of ALL the cookies. However, you may visit "Cookie Settings" to provide a controlled consent.
Cookie SettingsAccept All
Manage consent

This website uses cookies to improve your experience while you navigate through the website. Out of these, the cookies that are categorized as necessary are stored on your browser as they are essential for the working of basic functionalities of the website. We also use third-party cookies that help us analyze and understand how you use this website. These cookies will be stored in your browser only with your consent. You also have the option to opt-out of these cookies. But opting out of some of these cookies may affect your browsing experience.
Necessary Always Enabled
Necessary cookies are absolutely essential for the website to function properly. These cookies ensure basic functionalities and security features of the website, anonymously.
Functional
Functional cookies help to perform certain functionalities like sharing the content of the website on social media platforms, collect feedbacks, and other third-party features.
Performance
Performance cookies are used to understand and analyze the key performance indexes of the website which helps in delivering a better user experience for the visitors.
Analytics
Analytical cookies are used to understand how visitors interact with the website. These cookies help provide information on metrics the number of visitors, bounce rate, traffic source, etc.
Advertisement
Advertisement cookies are used to provide visitors with relevant ads and marketing campaigns. These cookies track visitors across websites and collect information to provide customized ads.
Others
Other uncategorized cookies are those that are being analyzed and have not been classified into a category as yet.
SAVE & ACCEPT
Powered by